Africa HuNa is a political and social networking site, which was created in Spain. The network has grown to include people interested in issues affecting Africans and people of African descent throughout the world, who prefer to communicate in Spanish.

The title, Africa HuNa, has a couple puns. HuNa represents Hu-Humanidad and Na-Naturaleza; the unification of Humanity with nature or, in other words, roots. Also, an alternative spelling of Africa is Africah, to emphasize the last syllable and show reverence. The spelling of Africah Una, translates to Africa Unite (like the Bob Marley song).

Sese Site, a sociologist and co-creator of the site, explains and shares her thoughts on the project.

For those of us who did not learn Spanish as a first language, the site is a great place to practice your Spanish, while keeping up with current topics and events in the world. People of various races, ethnicities and nationalities are communicating in Spanish regarding activism, music, politics, literature and many more topics. When I see that someone has posted something interesting, I leave a message directly for that person. Whenever I have a question about an issue related to Africa and I want quick feedback, I visit Africa HuNa.

This is a MOVEMENT: Alicia Anabel Santos on Afro-Latinos, The Untaught Story

The documentary film series Afro-Latinos, The Untaught Story, developed by the independent production company, Creador Pictures, brings to light the history, culture and contemporary challenges facing blacks in Central and South America, as well as the Caribbean.

Here is the English trailer…

…and here is the Spanish trailer.

Clearly, the team recognized that such an ambitious and important project could only be complimented by an incredible website. www.afrolatinos.tv (designed by Magdalena Medio) is the perfect blend of style and substance. There you can learn countries in Latin America and the Caribbean that received enslaved Africans and from where in Africa they came. Each country the crew visited or plans to visit includes a historical and cultural overview of the African populations there. Also, you can share facts or stories with the team for a given country. The viewer will also get a sense of the creators’ personal commitment to the project; There are several hours of very intimate and personal reflections and conversations throughout the filming process.

I am honored to have had the opportunity to speak with Alicia Anabel Santos, one of the series co-creators about the project. Alicia explains that this project represents not only a tribute to African ancestors and their descendants currently living in Latin America and the Caribbean, but a movement.

How did you become involved with the Afro-Latinos project? How did the idea for the pr

I became involved in the Afro-Latinos documentary after writing an article published in Urban Latino magazine entitled, “Two Cultures Marching to One Drum,” which honors the contributions of Africans in both the Black and Latino community, our shared history, and define what it means to be Afro-Latino—aiming to unite these two communities. Renzo and I were both on a journey of self-discovery searching for the answers to very specific questions– Why have Latinos rejected their African ancestry? Why are we denying our African roots?” Renzo invited me to join him on this investigation to learn more about Afro-Latinos throughout Latin America. END_OF_DOCUMENT_TOKEN_TO_BE_REPLACED

Flamenco and African Rhythms, Jazz, Rock and Gospel: For Astrid Jones it’s all in the mix 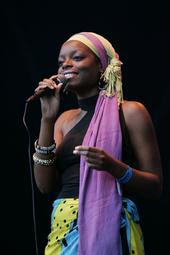 I came across the photo above while playing around on MySpace. When I visited her page and put a voice to the face, I knew I had to contact her. Initially, I just wanted to say hello and that I liked her songs. However, I also wanted to share it with others who I knew could appreciate it. When I told her about Live Unchained she was eager to contribute to the anthology. Writing back and forth, we said that if we ever had the chance to meet in Spain, we would connect. We both followed through and I am so happy that the supporters of Live Unchained will get to know her voice. If you like fusions, especially with African roots, as band member Alex Ikot says, Astrid Jones Ndjoli is a musician you should know. After meeting Astrid in person, I think this photo reflects her well. Her smile is big and sincere, she is as confident as she is humble, and really is that beautiful in person.

In this performance for Repertorio on Solidaria TV Astrid, Nacho and Alex Ikot share original songs, covers and jazz standards. I had never heard The Police’s “Roxanne” and Barry White’s “Never Never Gonna Give You Up,” interpreted with both Flamenco percussion and skat. I loved it! They truly have a special and distinct sound. The group gives concerts about twice every month. If you are in Madrid, you should visit their MySpace page to see when they’ll be performing.

Astrid also sings with a gospel choir in Madrid called Gospel Factory. I heard them sing and felt like I was at a Sunday morning service in Chicago.

Although music is such an important part of her life, Astrid says: “If I say I want to be a singer and that’s it…It’s not enough.” Astrid’s parents came to Madrid from Equatorial Guinea over thirty five years ago. Although she was born and raised in Spain, people, including the police, often assume that Astrid is an immigrant. “I go to work and a police man asks me for my identity card…it’s a very common thing.” Such experiences, in addition to the relationships she has with other people of African descent here, have made her conscious and concerned about the situation facing the black population.

To Live Unchained, Astrid is contributing “Mujeres” and “Life Happens Everyday,” which you can hear on her MySpace page. You’ll be able to hear her songs and contributions from other women on our website at http://www.liveunchained.com soon.

Live Unchained brought me to the best part of Madrid, the terrace of Lucía Asué Mbomio Rubio. A place where I had a wonderful welcome party, great conversations and filmed the video you see above.

One day, many months ago, I decided to promote Live Unchained via facebook and came across a page posted in Spanish for an organization called Alto Consejo de las Comunidades Negras. I contacted every member that was on Facebook at the time, including Lucía, the director of Communications and Media. She sent me back a beautiful and encouraging response–the last line of which read: “Vuestra lucha es también la mía,” Your fight is also mine. True to her word, she has been eager and generous in supporting and promoting Live Unchained.

To Live Unchained she is contributing a documentary, “The Invisible City: Voices in the Cañada Real Galiana.” The documentary portrays the largest illegal settlement in Europe. Lucía artistically captures the challenges facing the forty thousand residents that occupy the Cañada Real. Diversity and contrasts characterize this zone; One can see, “chalés of luxury and shacks, addicts and volunteers, businessmen and pariahs…without access to a hospital, nor a school” (for a more detailed description see this PDF). The documentary has been shown at the World Social Forum in addition to receiving various accolades in different countries. Here is a teaser.

Aside from her art, she has one of the most enviable jobs in Madrid. She is a television personality for Españoles en el Mundo, which airs on the national channel, RTVE. As a reporter for this program, she has had the opportunity to travel all over the world including my hometown Chicago and her Father’s homeland, Ecuatorial Guinea. You can see the full episode of Ecuatorial Guinea here. END_OF_DOCUMENT_TOKEN_TO_BE_REPLACED

Posted on August 2, 2009 by Live Unchained | Leave a comment

Hello journalists, newsies and information lovers! Enter the International Center for Journalists’ (ICFJ) competition to win a Flip Cam and share your opinion with the committee and followers of ICFJ. Submit a video in any language (if not in English, you’ll need subtitles) that shows why you think quality journalism matters. You have creative license to submit whatever you want–a song, music video, poem, etc. I suggest you Live Unchained, plan and bring it!